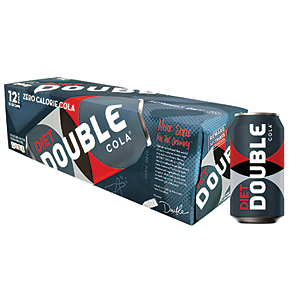 packs. The tagline “Surprisingly Diet” can be found on Diet Double’s new packaging and is designed to attract consumers who typically do not consume diet beverages because of the stereotypes that diet drinks have received in the past, the company says. The new cans and 12-packs were released in October and feature hand-drawn designs.

The Double Cola Co. expands beyond the CSD market