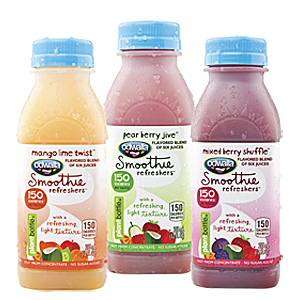 Accounting for 19 percent of global launches in 2010, the United States reported twice as many launches of products that contain coconut water compared to the previous year, according to Mintel. In addition, Canada, Germany and the United Kingdom entered the category for the first time in 2010, the report noted.

Mintel’s Global New Product Database (GNPD) showed that between April 5, 2011, and April 5, 2012, 105 new beverages highlighted the use of coconut. The products ran the gamut from coconut waters to spirits as well as new products mixing coconut water with tea, aloe and probiotics, according to a search on GNPD. Of the 105 products that launched highlighting coconut, 31 used coconut water or coconut juice in their formulations, GNPD data shows.

Giampetro of iTi Tropicals predicts that the use of coconut water as an ingredient will increase.

“The future that we see is the use of coconut water as an ingredient for formulating lower-calorie high juice content beverages,” he explains. “We are starting to see more products coming out promoting this. Sports drinks and electrolyte beverages are also appearing more and more in the market.”

As an ingredient supplier, iTi Tropicals has been an importer of tropical and exotic fruits for almost 25 years, Giampetro says. It maintains long-standing relationships with iTi Tropicals’ processors, which are annually audited by third-party companies.  A rigid approval process also exists for new processors, he notes. In business for nearly a quarter century, iTi Tropicals is careful to balance price with quality for its imported ingredients, he says.

“The key focus is importing the most cost-effective product at the highest quality and consistency,” Giampetro says. “We have our own internal [research and development] and [quality control] departments which work closely with processors around the world.”

Source is important, as he cautions that if coconut demand continues to rise in the next five to 10 years, the continued qualification of high-quality and consistent sources of supply will be a challenge.

Mintel’s 2011 “Coconut Popularity and Use Soars” report also predicted the growth of coconut’s use in categories beyond coconut water. The report’s author, Craig Thayer, global food and drink trends analyst for Mintel, noted the future prospects for the ingredient.

“If we look to broad consumer trends, people tend to believe natural products are healthier products,” Thayer wrote. “This sentiment is likely to continue, making a favorable climate for coconut. Coconut has, by and large, a healthy halo. It is also still connected to freshness and refreshment, allowing for innovations that seek to promote healthy, fresh indulgence — we’ve seen this in sports drinks and its use in spirits also attempts to evoke feelings of relaxation.”

Spirits infused with coconut, such as Hamilton, Bermuda-based Bacardi Ltd.’s Bacardi Rock Coconut rum and Ciroc Coconut vodka from Diageo, Norwalk, Conn., have been part of the trend of spirits switching from heavily creamed coconut drinks to fresher and lighter alternatives, the Mintel report highlighted.

Thus, perhaps an updated version of the personal ad featured in the song “Escape” might seek someone who likes low-calorie piña coladas — and getting caught in the rain. BI

Ingredient supplier iTi Tropicals predicts that coconut water will increasingly be used for lower-calorie formulations, such as the 150-calorie Odwalla Smoothie Refreshers from the Half Moon Bay, Calif.-based subsidiary of The Coca-Cola Co.